The Belgo is the only machine pistol in Brink.

The Belgo is unique in that it is the only fully automatic handgun available. It also has the largest magazine size and greatest stability for a handgun, making it ideal for extended periods of fire.

The downside is that it has the lowest damage and also shares the worst accuracy with the Tokmak. It also doesn't allow much spare ammo to be carried. This limits its practical use to hip-firing and suppressive fire tactics.

In the official Prima Strategy Guide, the weapon chart lists the Belgo as being a panic weapon, and for good reason. The Belgo can be best used when a player's primary weapon is reloading and is ambushed at close range by enemy players, or if the wielder needs to escape from danger.

The Hockler is an alternate model for the Belgo which is only available by pre-ordering the Spec Ops Pack. The models are roughly the same size and are statistically identical.

Its design is directly based on the Heckler & Koch MP7, and its name is an amalgamation of the manufacturing company's name. 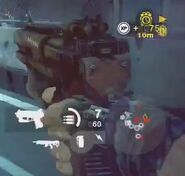 A first-person shot of the Belgo. 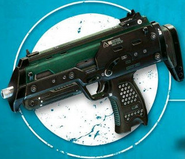 The Hockler model, from the Spec Ops Pre-Order Pack.

A released screenshot of the Hockler model.