Chen was one of the original engineers of the Ark. He is seen by many as an honest, uncomplicated man of the people, and enjoys strong support among the refugee Guests. Forced to operate underground by what he sees as Security oppression, Chen leads the Resistance against the status quo where the thirsty many work to support the privileged few. -Game's manual

"Brothers, if we stay here, we die! To save our people, we must escape the Ark!" -Brother Chen, Resistance introduction

Brother Chen is the leader of the Resistance, an organization involved in a tense struggle with the Ark Security Forces. He generally handles all Resistance mission briefings, and is probably involved in the planning of the objectives. He is affiliated with other groups as well, including the AWU (he is its General Secretary).[1]

Born in the People's Republic of China, Chen seems to have started his career as an industrial worker -- specifically, a welder -- which would explain his empathy for the general populace of the Ark. Entries from his personal journal reveal various aspects of his life and personality, including his hatred of the Founders and the circumstances of his brother's death. The entries also reveal that the Ark will literally decay and become uninhabitable -- and Chen is the only one who knows this. 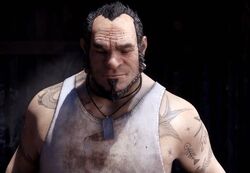 Joseph Chen participated in negotiations between the Guests, the Security, and the Founders. He negotiated on behalf of the Guests, attempting to improve their living conditions. The negotiations were tedious and ineffectual, much to Chen's frustration. The Founders, to him, seemed incompetent and mired in bureaucracy, while Clinton Mokoena, who negotiated on Security's behalf, seemed hostile and contemptuous.[2] Chen's pleas to search the outside world for surviving human civilizations were ignored, and the actions of the Founders led him to believe (rightly[3]) that they were withholding information from him.[2]

Chen quickly realized that peaceful negotiations would not accomplish anything notable. He knew also that the Guests were becoming restless and angry, and that armed conflict between them and Security was imminent. To prevent dangerous extremists from inciting unnecessary violence and destruction[note 1], and to convince the Founders he was the more responsible solution, Chen reluctantly made himself the figurehead for the Resistance, a group of Guests seeking to engage in all-out warfare against the Security and Founders.[2] He spent many months inspiring bitter hatred among the Guests[3] and organizing secret preparations for warfare right under Security's nose[4].

Chen had an ulterior motive to leading the war; he knew that the Ark's Arkoral had become sterile and was breaking down, but he did not trust the Founders or Security enough to inform them of the problem. Believing that he would lose his credibility if he told the truth, Chen instead kept the information to himself. Whenever the talks between the factions began to focus on damage caused by Arkoral breakdown, Chen blamed the damage on normal wear-and-tear, improper maintenance, and even the use of Security equipment (much to Mokoena's anger[5]). Chen believed that he could solve the problem with assistance from the outside world; to that end, he personally oversaw a covert operation in which a pilot was rescued from the Security Tower, and a plane was stolen and flown out of the Ark's airport. This operation brought hostility to every corner of the Ark -- from the slums of Container City to the Ark's lavish Resort -- leading many Guests to question Chen's wisdom and motives.[6]