The CARB-9 is a Submachine Gun in Brink.

The CARB-9 is a popular choice among players due to its high damage. An average magazine size, quick equip speed and a relatively low maximum bullet spread makes it an excellent rapid offense weapon.

Despite having an in-game accuracy rating similar to the Galactic, it's actually more comparible to the highly inaccurate Tampa. It also has the worst stability of all the submachine guns.

There is a 'Vault 101' (Security) and a 'FNV Vault Boy' (Resistance) skin which are only available by pre-ordering the Fallout Pack. They do not affect the CARB-9's statistics in any way.

A customized CARB-9 with scope, silencer, grip and drum mag. 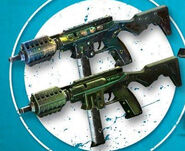 The Fallout skins for the CARB-9.