Container City is a map used for the missions Day 7: Attack on CCity (Resistance) and Day 4: Dirty Bomb (Security).

Security must destroy a gate, escort a maintenance bot, repair a crane, and finally deliver a sample to an extraction point. Resistance forces win if they stop Security from completing any core objective before time runs out.

Container City was at first a shipping dock on the Ark. When refugees came to the Ark, the dock became a rough shantytown where the Rebels now live. The terrain of this area offers a great place to practice the SMART system.

The lack of maintenance, marine corrosion, and pillaging accelerated the aging process. Old rusty containers are piled dangerously high and those that were not strong enough to be stacked have collapsed completely.

Now thousands of men, women and children live in tight, confined spaces with almost no access to vital resources. Out of this decay, the Resistance was born, and they continue to use the city as a base of operations, hiding amongst the civilian populace.

The Security head into Container City on day 4 of the campaign, titled Day 4: Dirty Bomb. Following the Security's raid of the unused airport terminal, Captain Mokoena informs the Security that the intel gleaned from the datakey reveals Chen's intent to confront the Security with armed force has been planned months before the actual warfare. In addition, one of the tricks Chen had up his sleeve was to use a viral bomb, stashed away in a crate functioning as a bio-weapons lab. Mokoena orders the Security to escort a maintenance bot to the crate, so that the bot can open the lab and allow the Security forces to capture the viral bomb. Once the bomb is in the possession of the Security, scientists on the Founders' side of the Ark will be able to develop a countermeasure to prevent any further bioterrorist attacks by the Resistance.

Day 7: Attack on CCity is the Resistance version of this level. Brother Chen reveals that while he and Nechayev are preparing plans for the latter's leaving the Ark, he also has a fallback plan. There is a "sickness" raging within the Guest slums that has spread quickly, and Chen states that some of his followers have helped him in synthesizing a vaccine for this "sickness" using the equipment abord the Hope, a medical ship that is part of the Container City. Chen knows that keeping this vaccine secure will allow the Resistance to ration it out to the infected Guests, thereby allowing the Resistance to earn the support of more Guests as well as making them a dominant power in control of the Ark. However, Chen has caught wind of a Security raid incoming to steal the vaccine, and knows that the Security will distribute the vaccine unfairly, just like the water rations. Chen ends his debriefing of the Resistance's mission by declaring that Container City is the Resistance's homeland and they must do anything and everything to keep the Security out. 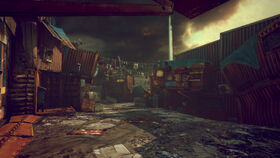 View towards the bay, including the Founders' Tower. 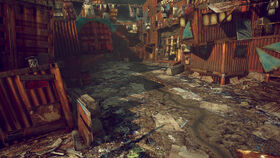 View of the first objective, the Gate. 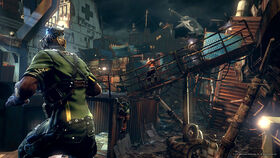 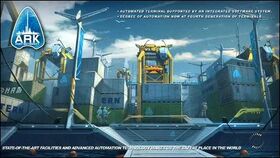 Container city before the seas rose 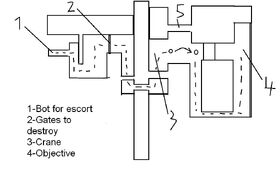 Security: 5th part is getting the objective to the helicopter 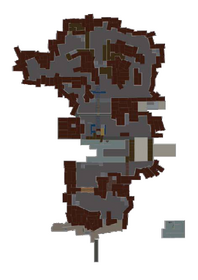