The Hjammerdeim is a Shotgun in Brink.

The Hjammerdeim serves as the Heavy shotgun in Brink. It features a larger magazine capacity, better stability and a faster, semi-automatic firing rate than its Medium counterpart, the Mossington.

To compensate, though, the Hjammerdeim's rounds have slightly fewer projectiles, meaning it deals less damage per shot. This, combined with its faster firing rate, means that it also tends to run out of ammo much sooner as well. 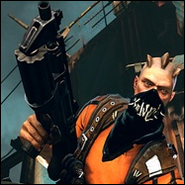