Medium describes and defines the general build and size of a created character in Brink, and is assigned through the Character Customization menu. Considered to be a "middle-of-the-road" build, it is the most well rounded in all fields. Medium characters start with an average base health. A character of medium build has access to more weapons than a character of a light build, but not as much as a heavy, and has a greater command over parkour moves than a heavy character, but not as much as a light. The medium build body type has up to medium weapons (assault rifles and shotguns) as its primary and up to light weapons (smg & long rifle) as its secondary.

A Medium being selected in BRINK. 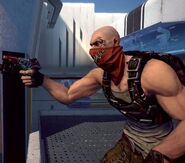 A Medium Resistance with a Sea Eagle Pistol.
Community content is available under CC-BY-SA unless otherwise noted.
Advertisement