Resort is a location in Brink, used in the missions Day 6: Black Box (Resistance) and What-If: Chopper Down (Security)

The Resort was a five-star eco-hotel reserved for tourists that came to the Ark. It has since fallen into disuse and appears to be completely abandoned. The Resort was not allotted as further living space to the refugees of the Ark for reasons unknown.

During the Resistance campaign, Brother Chen tells the operatives that in order to escape the Ark, the Resistance will need a crashed chopper's navigation computer so that Nechayev can map out a route. He orders the operatives to go to the Resort, where a Security helicopter has crashed with its nav box still intact, via boat. After the Resistance soldiers bring down the crashed helicopter from a pillar, they use a robot to extract the nav box. They then must escort the robot to the boat for evac.

Security spawn in the first area.

Resistance spawn in the first area. 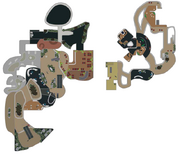