The Ritchie is the only revolver in Brink.

The Ritchie fills the role of high damage sidearm in Brink. It also boasts the highest aimed accuracy of all the Handguns, meaning that it makes an excellent ranged weapon for players with patience.

Unfortunately, it has several downsides to make up for this potency. It has the lowest magazine capacity, carried ammo and reload speed of all the Handguns, as well as a relatively slow equip speed.

The recoil of the Ritchie can also make the shots quite inaccurate if fired off too fast, especially when players panic. As such, this weapon should mainly be used in small, medium to long-distance firefights.

The Caesar is an alternate model for the Ritchie which is only available by pre-ordering the Psycho Pack. Although the Caesar is smaller in appearance and has a unique reloading animation, the weapon is statistically identical to the Ritchie.

The Caesar takes the form of a top-breaking revolver based on the IZHMECH MP412 REX. In fact, the Caesar's name is a reference to its counterpart's ("rex" meaning "king" in latin and "caesar" being the imperial title given to Roman emperors).

A Resistance Caesar with a Soda Can Silencer. 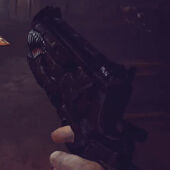