The Anger is an Outfit Archetype in Brink.

The Anger is an outfit for Resistance characters that takes the form of a youthful rebel. It is considered to be the most popular archetype for the Resistance. It is also the last outfit to be unlocked at level 20.

The Facegear is a bandana with a stitched grin.

The Jacket is a hoodie with ripped sleeves and roping.

The Pants are a pair of baggy jeans with knee patches and dark boots with colored laces. The jeans are fastened with rope and the cuffs are tucked in with cloth straps of some sort. 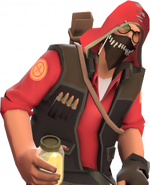 The Sniper from Team Fortress 2, wearing The Anger hood and mask.