The Bomb is an Outfit Archetype in Brink.

The Bomb is an outfit for Security characters that takes the form of a traditional bomb suit. It consists of three items and is the only Security Outfit to feature a full 13 color schemes.

The Head Gear is a heavy-duty helmet with full-face visor.

The Jacket is a Hurt Locker-style explosive ordnance disposal suit.

The Pants are a pair of bulky leggings with kneepads and what appear to be interwoven armor strips covering the shins. The back of the legs also feature zippers that are half-open and are partially covered by two straps.

A released render of The Bomb. 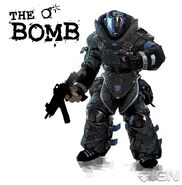